This recipe is based on Priya Krishna's Saag Feta recipe. I stumbled across it while I was watching cooking videos from the Bon Appetit YouTube channel. I've linked to the original and to the video below and I really suggest watching the video if you haven't made Saag before. I learned so much!

My version has been modified to remove the onion, garlic, and ginger in the original; however, if you can safely eat those foods, I'd suggest checking out Priya's original recipe below. Or buy her book: Indian-ish

Rice, Roti, Naan, or Pita bread to eat the Saag with

Important
Prep all of the ingredients before you start cooking, as once you start there is no downtime to do prep in.

Ghee (if you don't have any on hand)
To make your own: put 8 T (1 stick) of butter in a sauté or frying pan and cook on medium heat until a white foam appears on top, butter solids appear in the bottom of the pan, and the butter is a light nut brown.

Skim off the butter foam with a spoon, pour the liquid butter into a heatproof jug, being careful not to include the butter solids from the bottom of the pan.

If you are going to reuse this pan for the rest of the recipe, wipe the butter solids out before continuing with it but it doesn't need to be thoroughly washed before you start.

The ghee takes 15-20 minutes and can be done ahead of time. Eight tablespoons of butter makes enough Ghee for this recipe.

Prep
Measure out the spices for the different stages, wash all of the spinach (unlike some recipes, it's not critical to get it super dry), roughly chop the celery, Serrano chili (optional: de-seed the chili) , and cut the feta into 1 cm cubes.

Method
Sauté the coriander seeds and two green cardamom pods in 60 ml (4 T) of ghee on medium heat until they start to brown.

Add the celery and asofoetida, let that cook until translucent, and add in the ground cardamom.

Slowly add in the spinach until it is all wilted. It doesn't need to all be cooked down to a mush just mostly wilted.

Take it off the heat and add the Serrano chili, lime juice, and the salt. Stir until combined.

Transfer the spinach mix to the blender or to a heatproof bowl if you are using an immersion blender. Blend until you have a saucy mixture with no big chunks left.

Add the spinach mixture back into the pan on low heat. If the sauce isn't very liquid add as much of the water as you need to. Mix in the cubed feta and cover it as much as possible with the sauce (so the feta picks up flavor of the sauce).

While the sauce and feta warms up make the chhonk. In a small saucepan, heat the rest of the ghee (30 ml) and the cumin seeds on medium-high heat. Once the cumin seeds start to brown, the red chile powder, and pour the mixture over the top of the saag feta. Note: the cumin seeds can go from lightly browned to burned in an instant, so watch this mixture carefully while you make it.

Serve with rice or flat-bread.

Note: the chili flavor will intensify over time, so if you eat this as leftovers the next day the Saag might be spicier. This and the fact that I don't like much chili heat in my food, is why I de-seed the Serrano chili. However if you like your food with more chili heat it might be a good idea (and less work) to keep the seeds in. 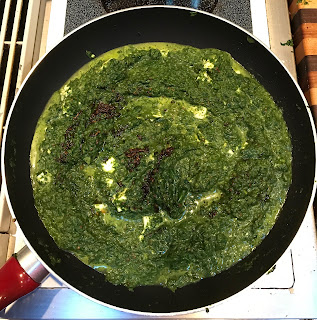 All comments are moderated. I know that food issues can be a minefield for some. Please keep comments to the topic of recipes and cooking. I will not publish comments about diets, weight, food-as-cure or anything else that I feel is off-topic. I will publish friendly, respectful, and thoughtful comments that have something to say about recipes, food handing, good substitutions, cooking techniques, favorite tools, or anything I feel is on-topic.

Favorite Recipes by Others